Patrícia Melo was born in 1962 and is a highly regarded novelist, playwright and scriptwriter. She has been awarded a number of internationally renowned prizes, including the Jabuti Prize 2001, the German LiBeraturpreis 2013 and the German Crime Award 1998 and 2014, and she was shortlisted for the Independent Foreign Fiction Prize and Time Magazine included her among the Fifty Latin American Leaders of the New Millenium. 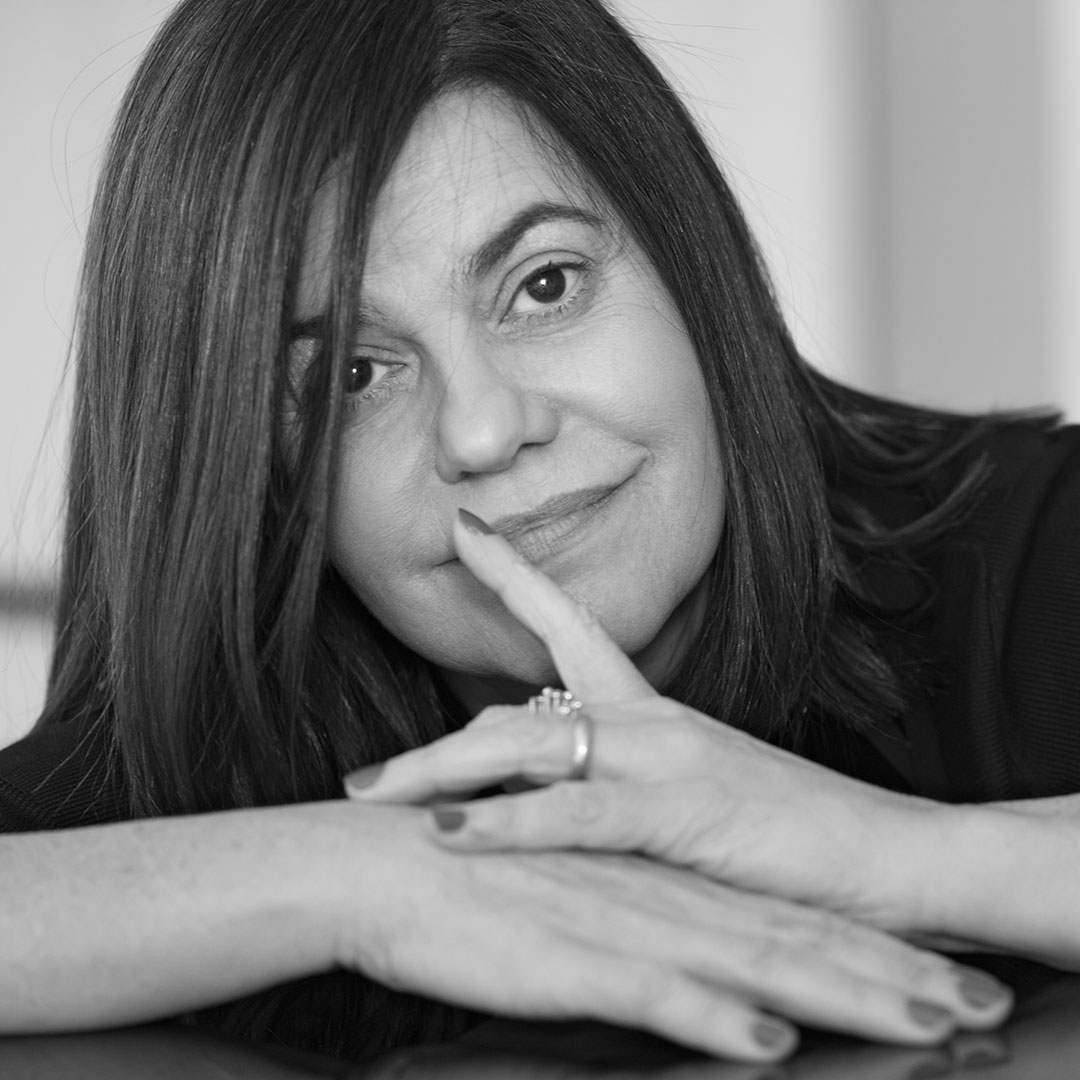 In her new novel Less Than One (“Menos que Um”), Patrícia Melo talks about the daily battles for survival of a group of characters – street vendors, parking attendants, unemployed people, drunks, thieves, and scavengers; people who all share the fact that, by force of circumstances, they have to live on the streets.
“We are people”, shouts Chilves, a young black man, semi-literate, who grew up in a garbage dump and walks twenty kilometres every day, collecting paper, glass and cans to survive. His dream, as a Humble Professor of Truth, is to promote the Revolution. Jessica, fourteen, a crack user in search of her mother, doesn’t quite understand Chilves’ political message but she likes him, and to Chilves she is a goddess. The girl becomes pregnant, so the young couple’s main goal becomes finding a home for their soon-to-be-born child, but also for their street companions. Among them is Glenda, with sharp claws and jaguar tights, who wants to be happy as Glenda, and not as Weverton, her baptismal name. There is Zélia, a madwoman who lives in the cemetery of Piedade, dreaming of piercing the eyes of her son’s murderer. This son, the reader will learn, is Jessica’s brother. The reader will also learn that on the street, such an inhospitable place, friendships exist just like anywhere else, and synergies work. With everyone’s collaboration, fighting against real estate speculators, this homeless community manages to occupy an abandoned building and create a solidarity project.
This novel by Patrícia Melo, in which literature and poetry intertwine the destinies of the forgotten and abandoned of the big city, tries to answer the most human question of all: What is there when what there is is less than one? The answer that emerges from Less Than One is one only: Beneath the dirt, the vice, the hunger, the cold, the invisibility, the violence, the fear, and the loneliness, these men, women and children are people who also dream, or have once dreamed. Patrícia Melo’s fiction mercilessly shows the inequality and social violence of contemporary Brazilian society, but allows a way out for its protagonists, who get a place to live together and continue dreaming.

Piled Women (“Mulheres Empilhadas”) discusses in harsh and humorous language the urgent issue of violence against women in Brazil. The book tells the story of a young lawyer from São Paulo who, eager to escape an abusive relationship, agrees to go to Acre, in the middle of the Amazon rainforest to cover a series of trials. While following the numerous cases of women murdered by their husbands, boyfriends or relatives, the young lawyer discovers the beauty of the forest and the dazzling and tragic reality of indigenous life. At the same time, while taking part in rituals involving ayahuasca, a hallucinogenic drink used for mystical purposes, she rediscovers the memory of her own personal tragedy: having witnessed, at the age of four, her father kill her mother.
Patrícia Melo creates a mosaic of a Brazil that endorses the killing of women and the mass imprisonment of black people, while turning a blind eye to the crimes of the white upper and middle classes.

»Engaging and well-written, the book is the first of the author with a female protagonist. In addressing a sad reality, Patrícia wanted to blend the plot with a little fable. Piled Women is a work of fiction that brushes with real events.«
Ana Clara Brant, Jornal Estado de Minas

»This is the subject of Patrícia Melo’s great new book […]. Based on real events in Cruzeiro do Sul, the lawyer investigates cases and hears testimonies of the tragic stories of women who have been piled into oblivion and impunity […]. The most striking thing is the metamorphosis of the protagonist, rational and modern, in her experience with the old indigenous women and their ancestral myths and spells, in visions of breathtaking beauty.«
Nelson Motta, O Globo

»It is literature inspired by life. It is fiction constructed within the pages of a book illustrating the real events that weigh every day on the pages of newspapers and news websites. It is a woman crying out for all the others. An urgent novel that instigates and denounces.«
Jornal do Brasil

»With writing that is direct and at the same time strong and poetic, the author turns into literature the reality reported in newspaper headlines that are often hard to believe. From judicial and legislative issues to the first sign of violence that, out of fear, is silenced. The doubts, the feeling of guilt, the discoveries and, after so many male voices in her works, the profusion of different female characters.«
Roberta Pinheiro, Correio Braziliense

»Brazil has a problem with femicides. It often takes years for a court case to be initiated and a few years longer if the victim was poor, black or indigenous. Melo makes the fates of real victims visible in her latest novel. Her determination to pursue a certain style, the freedom with which she writes confidently around generic set pieces, is evident at first glance in the variable structure of her chapters. Melo puts words into a singing rhythm, arranges them in verse so that they unfold as poet.«
Frankfurter Allgemeine Zeitung

»Patrícia Melo’s novel is a powerful plea against male violence, not a diatribe but a brilliantly composed piece of literature.«
Marcus Müntefering, Der Freitag

In the Bible, Gog Magog stands for the enemy of the chosen people, in the revelations of St John, even for the Antichrist. In Patrícia Melo’s novel the name stands for the monster in each one of us. The narrator of this domestic drama with apocalyptic dimensions is an ordinary citizen, fifty-four years old, a biology teacher at an evening school, and living with his wife Marta in São Paulo. His profession bores him, his marriage has become routine. Only the new neighbour Ygor stirs his blood: because he makes so much noise, he hates him with all his heart and even wishes him dead.

One day, by chance, he gets the keys to Ygor’s apartment. He enjoys the feeling of power and scrambles around until his neighbour, whom he calls Mister Upsilon, returns unexpectedly. Mister Upsilon falls and, in the fighting that ensues, dies. The narrator now has a problem: To hide the business about the key, he has to make the corpse disappear. But this is not so easy. He dismembers it and drives out with the luggage compartment of his car full of body parts, but where there was previously open country there are now family homes, and finally he returns to his apartment with the plastic bags. For a few days he sits there with the bags until the police come and pick him up. Here his life takes an unexpected turn: prison is like a cure for him, he finds new meaning in life by learning to do useful things like building water cocks. When the court finds him guilty, the public takes interest, and along with the Sunday visits of his ex-wife, a new female admirer starts visiting him.

With her frenetic rhythm, her acidic language, ironic and full of humour, Patrícia Melo penetrates the mind of a man who is stunned by the world around him and incapable of living with the noise of contemporary life, and builds a plot around the effects that noise and silence are capable of producing on human behaviour.

»Gog Magog combines a critical tone in relation to society with an agile and humorous narrative that captures the reader’s attention.«
O Estadão

»One of the greatest Brazilian authors of our time.«
RFI

In her long-awaited new novel, Ghost Light (“Fogo-Fátuo”), Patrícia Melo tells a gripping crime story. Azucena Gobbi, one of the few upright detectives in São Paulo, is going through a bad patch: Getting home one day, she catches her husband sleeping with her sister. At the same time she is investigating the murder of the dashing telenovela star Fábbio Cássio. The main suspect, his beautiful girlfriend Cayanne, does not seem very affected by his death, as she is too busy struggling to become a celebrity herself. While Azucena tries to get her private life under control, her investigations unexpectedly lead her to a paedophile ring – a place of no return, it seems… Ostensibly entertaining, this artfully constructed novel once again shows Patrícia Melo’s skill at dismantling Brazilian society and uncovering not only the killer, but also the lies some lives are built on.

»Ghost Light is a great debut adventure for detective Azucena Gobbi. It moreover proves, to the despair of certain academics, that crime novels can, first and foremost, be good literature.«
O Estado de S. Paulo

The Body Snatcher (“Ladrão de Cadáveres”), Patrícia Melo’s latest novel, is set in the Pantanal, the vast untamed Brazilian lowlands bordering Bolivia. One bright Sunday, alone on the banks of the Paraguay River, the narrator witnesses a fatal crash of a small plane. He finds a kilo of cocaine in the pilot’s backpack. When the crash is located several days later but the pilot’s body is missing, a macabre and dangerous scheme is hatched… Ladrão de cadáveres is a mesmerising mix of conspiracy, sex, betrayal of the living and desecration of the dead.

»An explosive mixture of dread, greed and corruption. You won’t put it down until you’ve read the very last page.«
Cosmopolitan Brazil

Writing in the Dark

In Writing in the Dark (“Escrevendo no Escuro”), Patrícia Melo brings to her first collection of short stories the same critical eye for detail and the same psychological insight that characterise her novels. These are stories that intrigue, disquiet, and sometimes puzzle, displaying a universality that addresses many of the anxieties and demons that besiege men and women in the twenty-first century.

Nominated for the Prix Fémina 1996, France

Sindróme do Pânico (in Writing in the Dark)
USA: Amazon Crossing